On the HLCCA drafting table since 2007, Retro Red Stripe was introduced during the HLCCA Conference 2009, Pittsburgh PA -- a perfect location since the original red stripe Fiesta line had also been introduced in Pittsburgh some 73 years prior. 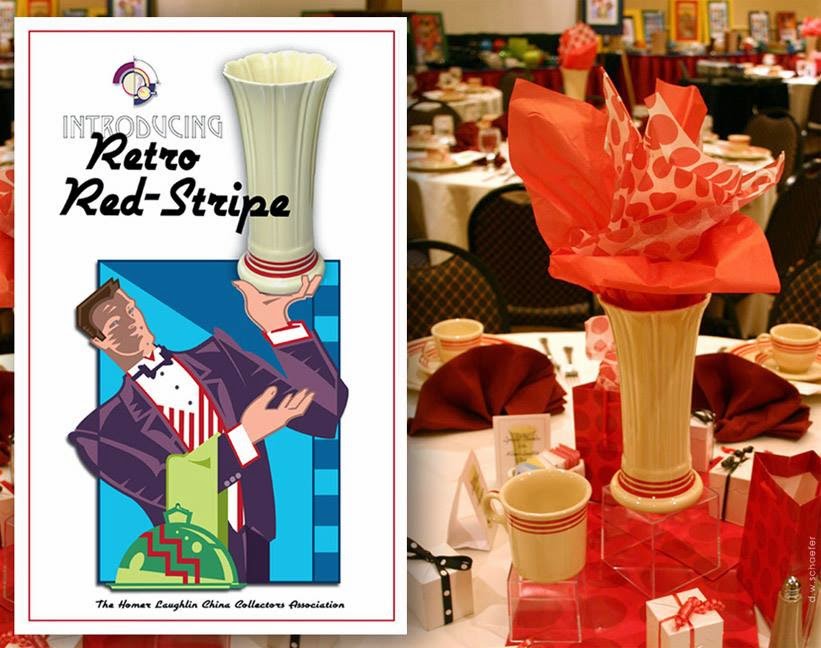 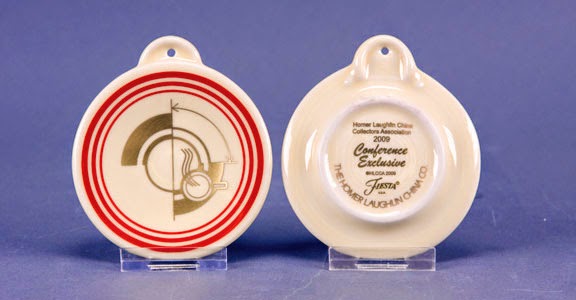 The 40 oz 8 1/4" serving bowl, 19 oz. cereal bowl and 9" luncheon plate
were introduced during Conference 2011.
These three items were offered for sale during the 2011 Saturday Show & Sale event,
then later offered in the HLCCA website. 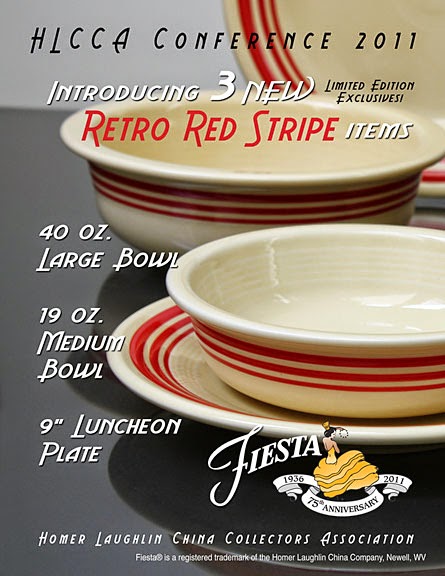 The 6" footed rice/dessert bowl was introduced during Conference 2011
and available for sale in the fall 2011. 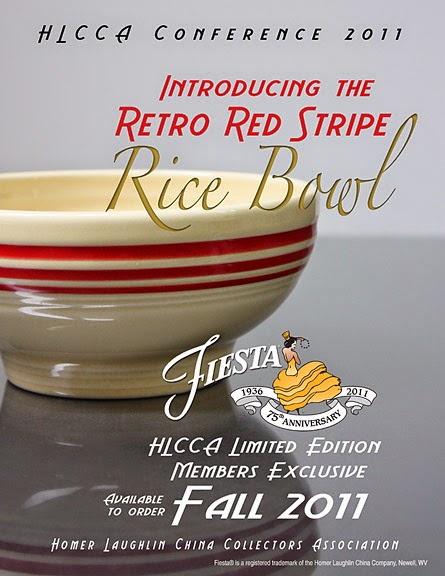 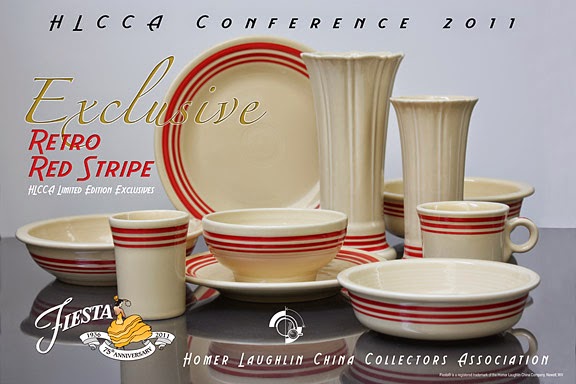 During HLCCA Conference 2012, Red Stripe carafes were auctioned off with proceeds benefiting the Tri-State Area Tuition Mission Foundation (formerly the Dollars for Scholars Scholarship Program) with funds earmarked to go to students of families employed by Homer Laughlin China Company or students living within the local East Liverpool/Newell school districts.

Red Stripe teapots, and sugar/creamer/tray sets were
Conference 2012 exclusive banquet centerpieces and the pedestal bowl
was the Conference exclusive given to all attendees. 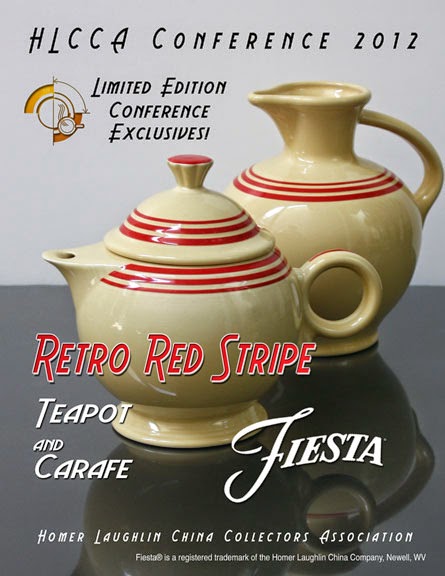 Individual creamers, individual covered sugars and salt/pepper sets were introduced during Conference 2012 (offered for sale during the 2012 Saturday Show & Sale event, then later offered in the HLCCA website.) 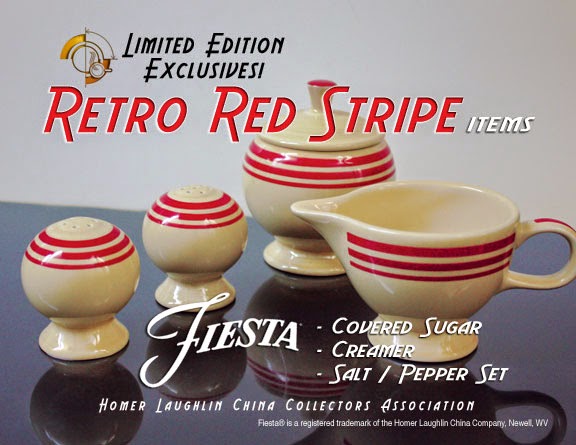 The small rice bowl was introduced during Conference 2012 and was offered for sale during the fall 2012. 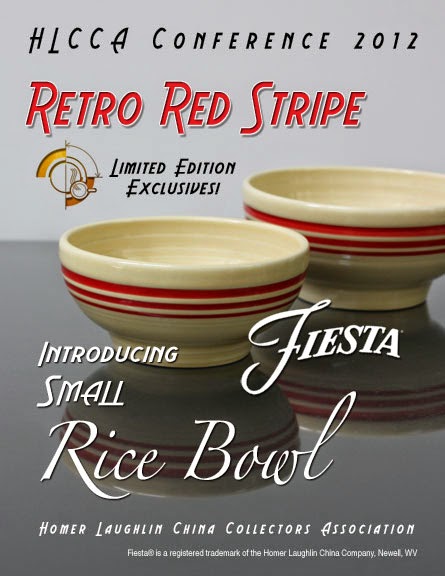 Introduced during HLCCA Conference 2013, the range top shaker set, ramekin, mini disk pitcher and 7" salad plate were offered for sale during the 2013 Saturday Show & Sale event, then later offered in the HLCCA website. 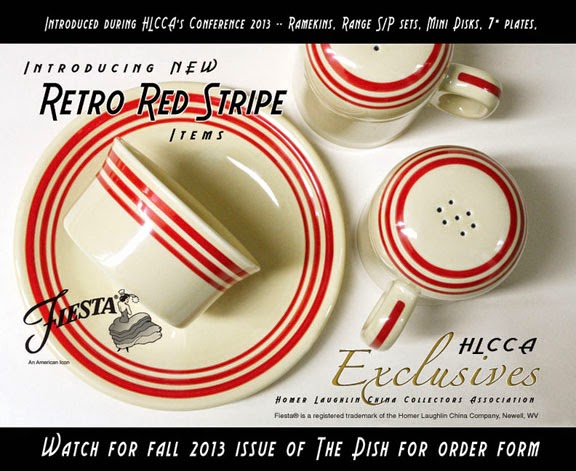 As of May, 2014 the Retro Red Stripe line includes:

HLCCA
The Homer Laughlin China Collectors Association (HLCCA) is a non-profit organization comprised of collectors, antiques dealers, historians and others who share an interest in the dinnerware and other pottery products that were, and are, produced by the Homer Laughlin China Co. (1873-present). HLCCA offers a wide range of services, events, and other benefits for people whose interest levels vary from mild curiosity to sophisticated collecting.

Promote Your Page Too

The Definitive Guide to HLC's Fiesta, Harlequin & Kitchen Kraft Dinnerwares, available for sale on the HLCCA website by clicking the photo above (Members: remember to log-in for discount) 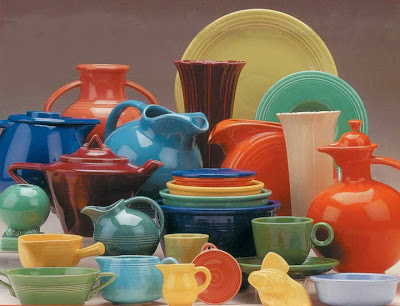 Got a question, comment or concern? Want to tell us about an event or activity of interest to HLCCA members? Contact DISHing with HLCCA at blog@hlcca.org.